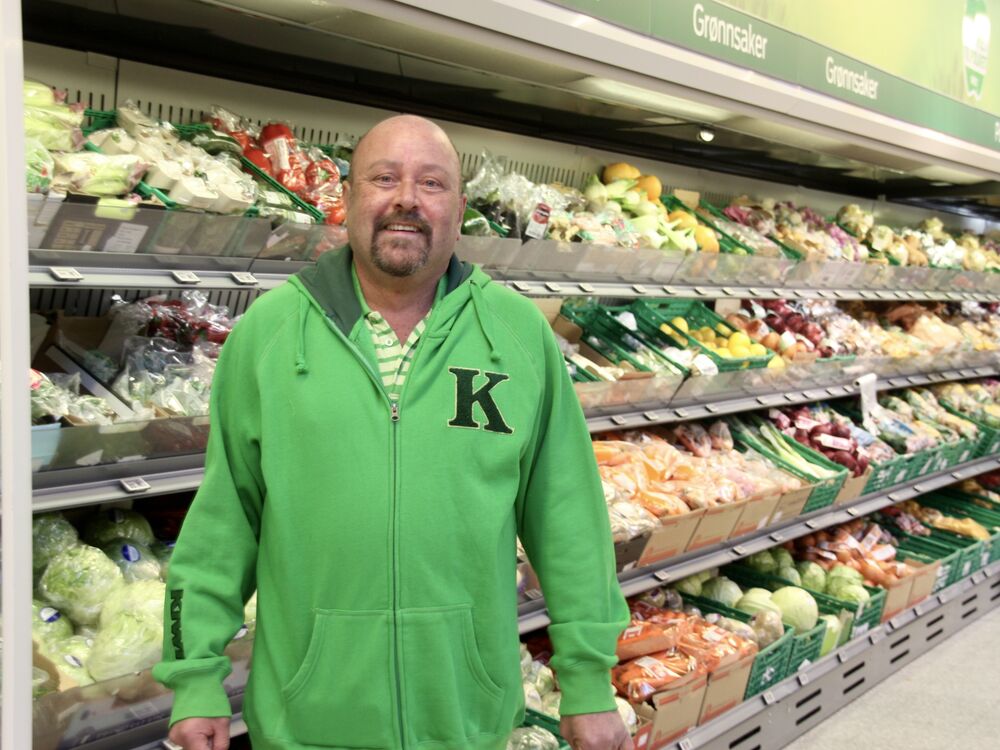 He's the man who loves to go the extra mile to ensure customers leave his store with a smile on their face, whether that means sending salmon by taxi and train to Finse or picking up bread for two customers in Drammen. For Oddbjørn Halbjørhus, the customer service gene runs in the family.
By Isabel Müller Eidhamar og Frazer Peter Norwell
5 min
Updated 01 November 2021

Over the years, Oddbjørn has become something of a celebrity in his home village of Hemsedal. He is the man everyone is looking for when they need help ordering Christmas delicacies or have a special request. He's also constantly looking for opportunities to contribute to the local sports team or fundraise for the community.

In addition, he is one of the first LGBT people to get married in Hallingdal and also is known for helping young people into work. Not only that, but he is also the second shopkeeper in the family to run a shop in Ulsåk after taking over the family business from his father.

"It's a bit of a fun story, really," laughs Oddbjørn. It's spring when we speak to the shopkeeper, and he's dressed in Kiwi's famous green uniform. He's taken a break from stocking the store's shelves to reminisce on how his adventure of running a shop began.

"It all started when my father left his old job as the head of the cooperative on the other side of the road. It didn't really go his way, so the old boss recommended he set up his own shop. Many people thought it was a crazy idea since the competition was so big, but in the summer of 1967, he opened his store," Oddbjørn says. Oddbjørn was just a couple of months old when the shop opened, but it became a second home where he spent a lot of his childhood. "My father being a shopkeeper was the source of my inspiration. It's in the blood. I started counting bottles and stuff when I was 4-5 years old. So in a way, I was always meant to be a shopkeeper," he explains.

In the beginning, the store was relatively small, but over time Oddbjørn's father expanded, even if it wasn't nearly as close to the investment that Oddbjørn would make into increasing the size of the business in later years.

However, It was never guaranteed that Oddbjørn would take over the shop. Oddbjørn was travelling with the military, and he and his father weren't speaking at the time, and it was through a friend that Oddbjørn heard his dad wanted to sell the store. Only then did the instinct to take over the family business kick in.

"I thought that I couldn't just let the store disappear. His new wife wanted him to sell the store, but then we agreed that I should give it a go," Oddbjørn left the military, and with only a few kroner in the bank, he travelled home to the mountain village to try his luck as a shopkeeper.

"I didn't get a loan or anything like that, and I had to find a way to finance it all. I didn't have a penny to my name and had to buy the store at full price. There was definitely no family discount when I bought the store," he says. In the end, he had to take out a pricey loan at an expensive fixed interest rate of 16 percent.

That was in 1988, and only a year later, the interest rate fell to six percent. "That was not fun, and there were some tough years in the beginning," Oddbjørn says, looking back at how he took over the store. "There was something about my father starting the store that made me want to continue it myself. Ever since I was little, all the grandparents said that they knew I would one day take over the store, and I used to think it was funny," he says.

In 2013, Oddbjørn chose to expand the store massively, a significant investment which the merchant himself describes as absolutely essential.

"The old building was small, and the space was used up to the last centimetre during the holidays. At that time, the store had already been extended twice by my father and then expanded twice by me," he says. The new plot made the store one of Norway's largest, but the architecture and construction methods needed to be adapted to the surrounding scenery.

"The idea behind it was to make it harmonise with the surrounding meadows and mountains. It's quite nice to look at when you are on Geiteberget and looking down. It is very much in the same style as the surrounding nature," he says.

From Geiteberget, you can see the vision the architect left behind because no matter what time of year you look down on Kiwi, the colours on the roof always fit in, kind of like camouflage.

"There are twelve different plants on the roof. The colours change with the seasons. In the summer, the roof is yellow, while it turns purple and red in the autumn," Oddbjørn says. 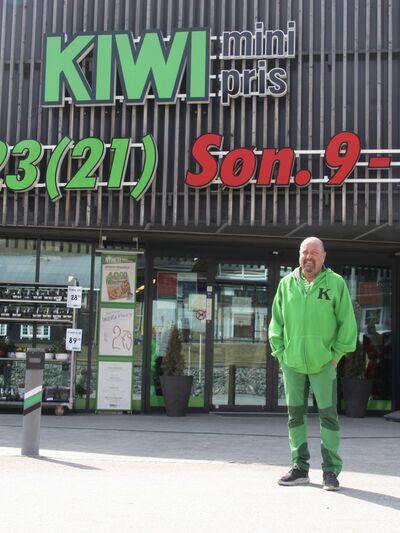 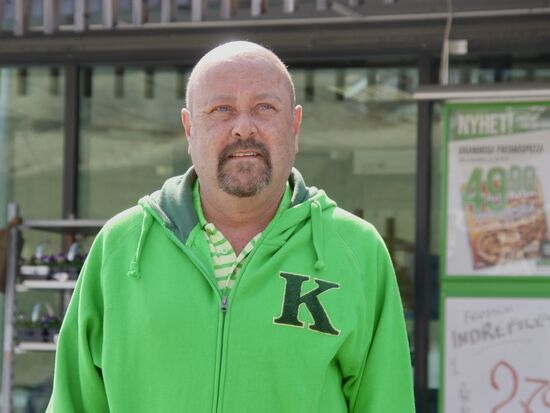 Oddbjørn is the owner of one of Norway's largest Kiwi stores. The new building took inspiration from the surrounding nature, and especially the Hemsedal mountains. Photo: Isabel Müller Eidhamar
"I was very inspired by my father, who was a merchant. It's in our blood." 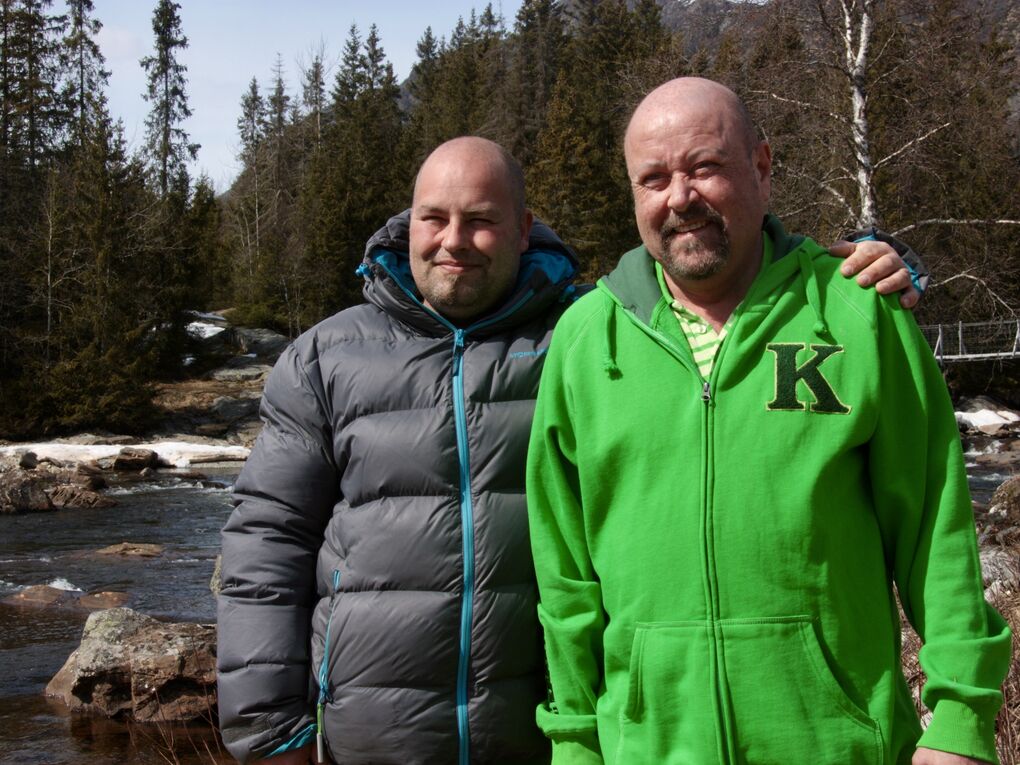 In 1996, the store became part of the Kiwi chain. Next to Oddbjørn during our chat is his husband, Kenneth.

"We got engaged on Christmas Eve in 2001 and got married in Hemsedal ten years later," Kenneth says.

He comes from Mo I Rana in Northern Norway, but love led him to Hemsedal as it has for many others. The two recently celebrated their tenth wedding anniversary.

"We were engaged for nearly ten years before we could get married," Oddbjørm laughed.

"We thought that once we were able to, it'd be nice to do it formally," Kenneth says.

"I was a little bit scared of what people would say when Kenneth moved here 20 years ago. It was okay with friends and family, but I was afraid I would lose a lot of customers because I was gay. But, actually, we were welcomed with open arms by the whole village. It exceeded all expectations," Oddbjørn explains.

These days their family is complete thanks to the addition of their dogs. Squeezed between the two on the bench is their dog, Dolly.

"We have had several dogs before that, But when they died, the house seemed to be completely empty," Oddbjørn says.

"And then we got Dolly and Tina," he adds.

The inspiration behind the names?

"It's Tina Turner and Dolly Parton, of course," Oddbjørn laughs. 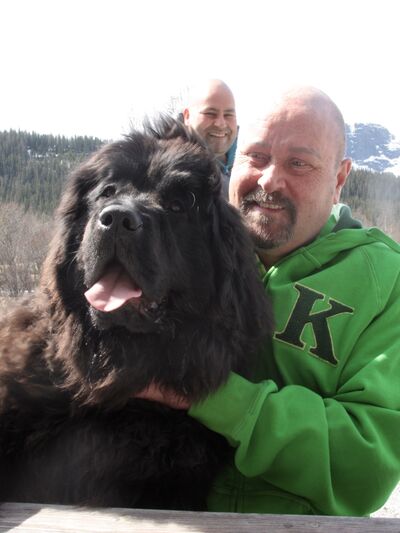 The dog Dolly takes up a lot of space in the guys' lives, both in size and but also in their hearts. Photo: Isabel Müller Eidhamar 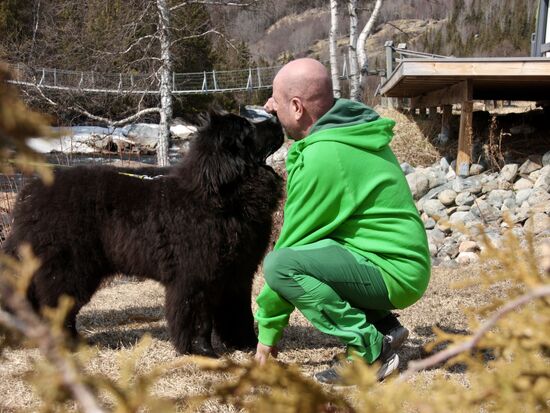 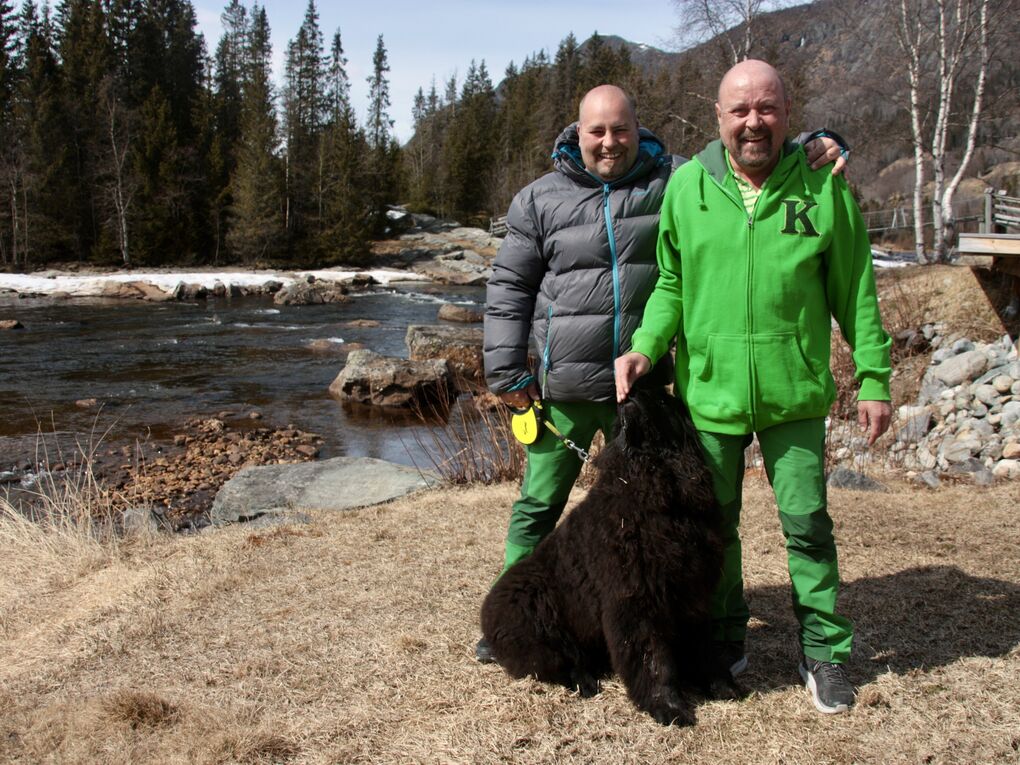 Good service is important for the gang at Kiwi in Hemsedal. Photo: Isabel Müller Eidhamar

Today, Oddbjørn's Kiwi store in Hemsedal is one of the largest in the country, even though only around 2,500 people live in the village all year round. In addition to this, the store also has one of Norway's largest selections of goods.

According to Oddbjørn, there is a great deal of freedom in owning the store itself, which is also why plenty of local products are sold here.

"The local food is a great way to stand out a little bit, especially as all the shops are so similar," he says.

Today, Kiwi sells products from local producers and businesses such as Himmelspannet,

Oddbjørn and the team have also been praised for being quick to pick up on new food trends, and when Salma Salmon, which can be used for Sushi, increased in popularity, the Kiwi store in

Hemsedal was the first in all of Hallingdal to stock the delicacy.

"I remember one Easter we received a call from the hotel in Finse over 1.5 hours away, and they said that they had run out of Salma. Several people at the hotel needed to eat, so they actually sent a taxi to come and pick the fish up from us in Hemsedal and then drove it to the train station in Gol before getting it back to the hotel by train, Oddbjørn laughs.

"Oddbjørn stacks shelves and pitches in with jobs just like the rest of the staff have to," Kenneth says.

In total, there is a team of 46 at the supermarket, and the company doesn't shy away from giving young people their first job.

"We may hire people while they are still young, but it is completely voluntary, and we work with parents to make sure that it never gets in the way of school work. Several employees started part-time as 14 or 15-year-olds before coming back as adults," Oddbjørn says.

"It's fun to see people come back again. We are a kind of family where everyone thrives," Kenneth says.

Being part of the local community is vital for the guys, both because they have employees from Hallingdal but also by contributing to local initiatives and volunteer work. For example, they have long supported Hemsedal Idrettslag. Their latest project is a donation of 100,000 kroner to the statue of the local ski star Ingrid Wigernæs which will be set up outside Trøymshallen.

"She was Norway's first female national team coach, and even took silver in the relay at the World Cup in 66, and in 86, she coached the women's national team to gold in the World Cup. Yes, and she's one of my aunt's best friends," Oddbjørn says proudly.

"People like this need to be highlighted and celebrated. It's great to be proud of people from Hemsedal and our village," says Kenneth.

And the best thing about being a grocer in Hemsedal? The guests, of course.

"No two days are alike. We meet lots of great people. It's a lifestyle. I'm thrilled to make customers happy," Oddbjørn says. 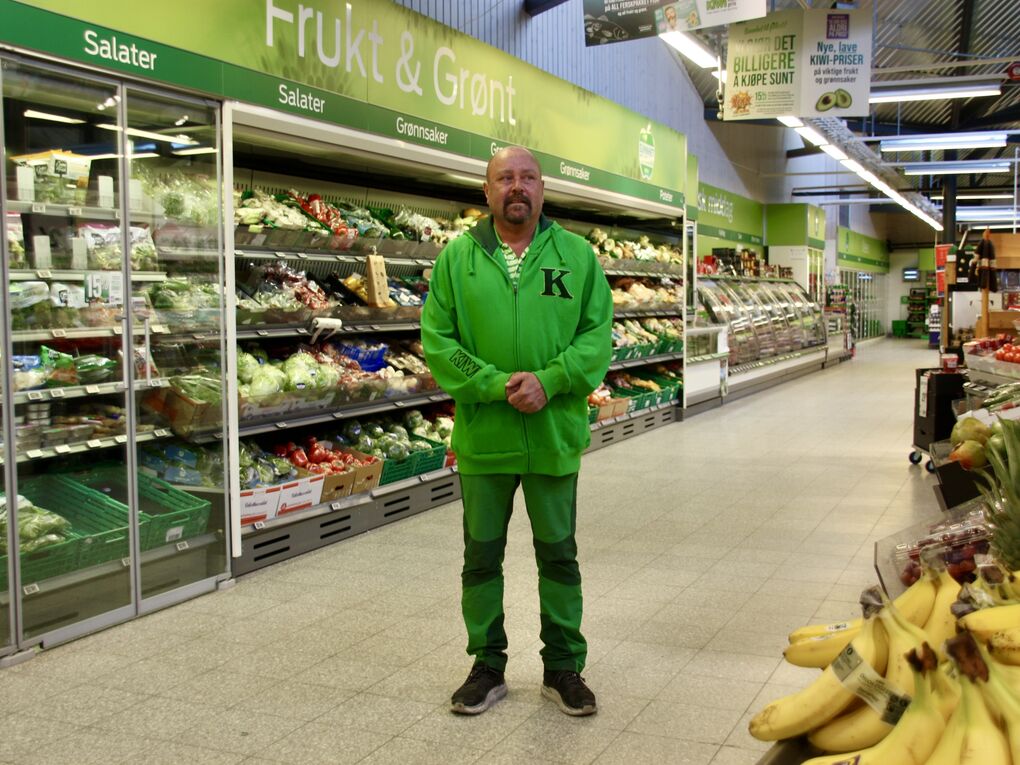 Oddbjørn in front of the fruit and vegetable counter at Kiwi. Photo: Isabel Müller Eidhamar